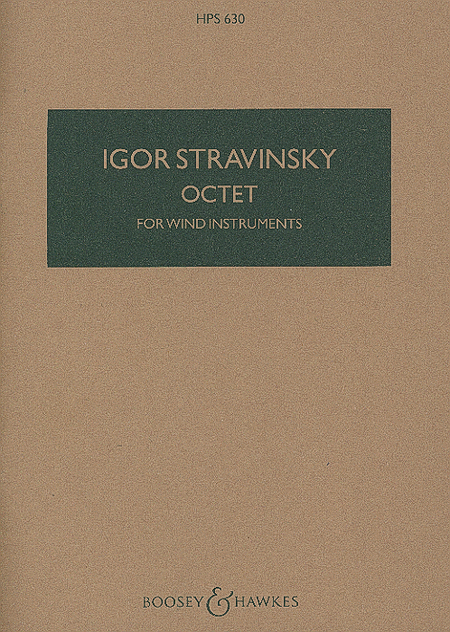 IGOR STRAVINSKY
OCTET FOR WIND INSTRUMENTS
From the CD booklet
Stravinsky is the root, the seed, the humus, and the feeding ground. A ground that not only nurtures the intricate tree that is 20th century music, but also the tender and new, or rather, ever-new branch this disc represents. The Octet for Wind Instruments (1923) is in fact the matrix from which the four pieces that accompany it gemmate, almost by spontaneous germination. To relate all of them, it is easy to see primarily from the same, though however unconventional instrumentation: flute, clarinet, 2 bassoons, 2 trumpets and 2 trombones. But this is only the surface; once this bark is torn away, it turns out that the growth rings of this metaphorical tree, that are the pieces themselves, are perfectly concentric, and more relevantly, reveal an unexpected multitude of shared “organic” elements.
The correspondences can be found in two statements about the Octet that Stravinsky expressedin his writings, which are complementary to eachother. The first one brings on the scene – a real coup de théâtre – an unexpected character: “As I was writing the last movement – wrote Stravinskyin the Conversations with Robert Craft – the Two-Part Inventions by Bach were lying somewhere in my subconscious. The neatness and the clarity of the Inventions represented, at that time, my ideal of writing”.
One must carefully interpret such a statement, however: Stravinsky does not find the “simple” counterpoint of the Preambles and Fantasies – as found in Bach’s manuscript in 1720 – a model to imitate, not even an aesthetic manifesto; there is no interest in a Bach revival. In fact the identity of the Octet is much closer to the esprit of a late-classicism divertimento than to a Baroque motet. Instead, the magnet by which Stravinsky is drawn, so to speak, is the illusion of counterpoint; the implicit, hidden, and invisible polyphony that shines perpetually in all Bach’s polyphonic writing.
As Robert W. Mann – a forgotten, but erudite composer – said, more than two colours are needed to highlight the contrapuntal parts of the Inventions: in the play of the voices there emerges always a third, or even a fourth voice. And this interlacing turns the apparent two-voiced counterpoint into an imaginary work of three or four voices.
The second statement is much more aesthetical than technical: “My Octet is a musical object. This object has a form and the form is influenced by the musical material by which the work is composed. It is a work based on objective elements, completely self-sufficient” (I. Stravinsky for the Arts Magazine, 1924). This is a perfect expression in musical terms of Husserl’s phenomenology principles: sound is an autonomous object, untangled from any external reality, and a musical work is an organism sustained and shaped by its own form. Hidden polyphony and objectivity.
These are the two categories – with respect to linguistics and aesthetics – that illuminate the formal skeleton in Stravinsky’s Octet. (Guido Barbieri)
The  outbreak of World War I forced Stravinsky to flee Russia with his  family and settle in Switzerland. He dealt with his homesickness by  using Russian folklore as inspiration for his work, while other  compositions from this time exhibited a jazz influence. Two of his best  known works from his Swiss period are Renard, composed between 1915 and 1916, and Les Noces, which he started in 1914 but didn't complete until 1923.
In  1920 Stravinsky moved his family to France, where they lived for the  next two decades. During that time, his notable works included a comic  opera, Mavra (1922), an opera-oratorio Oedipus Rex (1927) and the "white" ballet Apollon Musagète (1928). He continued his prolific output into the 1930s, composing such works as Symphony of Psalms, Persephone, Jeu de Cartes and Concerto in E-flat.
Following  the deaths of his wife and a daughter from tuberculosis, Stravinsky  moved to the United States in 1939. He delivered a series of lectures at  Harvard University, and in 1940 he married artist and designer Vera de  Bossett. That year, Stravinsky also finished one of his most important  works, Symphony in C.
Stravinsky was nearly arrested for  his rearrangement of the national anthem during a performance in Boston  in 1944, but otherwise he found a welcome reception in his new country.  He became a U.S. citizen in 1945 after settling in Los Angeles, and  went on to enjoy more successes with such operas as The Rake's Progress (1951) and Agon (1957).
After  a period of decline in his health, Stravinsky died at his Manhattan  apartment on April 6, 1971.
Score at Boosey & Hawkes
PETER EÖTVÖS
OCTET
From the CD booklet
In the Octet for winds by Peter Eötvös (2008), written in memory of Karlheinz Stockhausen, the paradigm of objectivity lies in the absence of any narrative intent. The writing proceeds in a compound of vertical cues whose transitions are entrusted mainly to the flute, the clarinet, and the bassoon’s concise perorations. Hidden polyphony emerges from the contrast between the fast and tense passages of the woodwinds and the steadily held support of the brass section. The impact between these two splitting and overlapping sound blocks, each in their own time and timbre, generates imagined voices. From this perspective, the reference to Stockhausen and to the “encoded” meaning of his favourite number 8 is to be seen as homage rather than as an aesthetic inspiration. (Guido Barbieri)
Composer's description
OCTET was commissioned by the Reina Sofia School of Music and was composed in memoriam of Stockhausen. The  number ‘8’ is linked to Stockhausen in many ways as he would’ve been 80  years old in 2008. He was mostly using the 8-channel sound technique  within his electronic compositions such as in the ‘Octophonie’ . OCTET is the realization of Samuel Beckett’s radio play “Embers”, from which I took out some extracts and used it for OCTET . The  unusual wind-instrument set-up (Flute, Clarinet, two Bassoons, two  Trumpets, two Trombones) makes it possible for the players to play it on  the same program as Stravinsky’s Octet.
Score at Ricordi 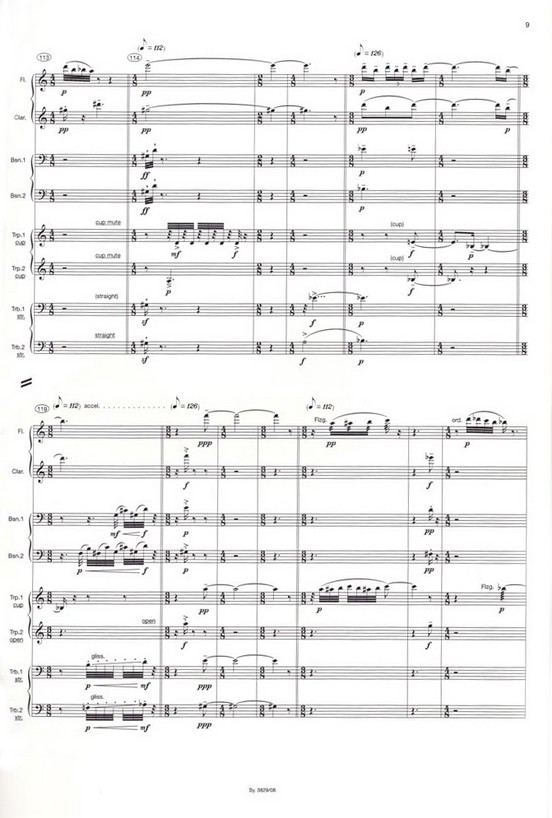 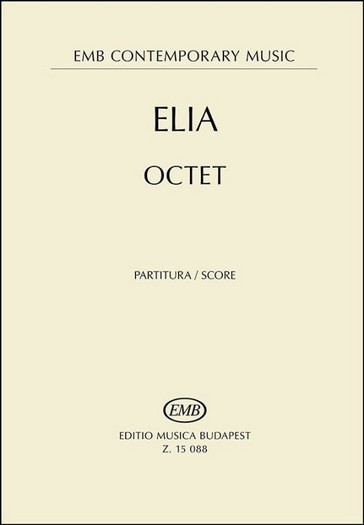 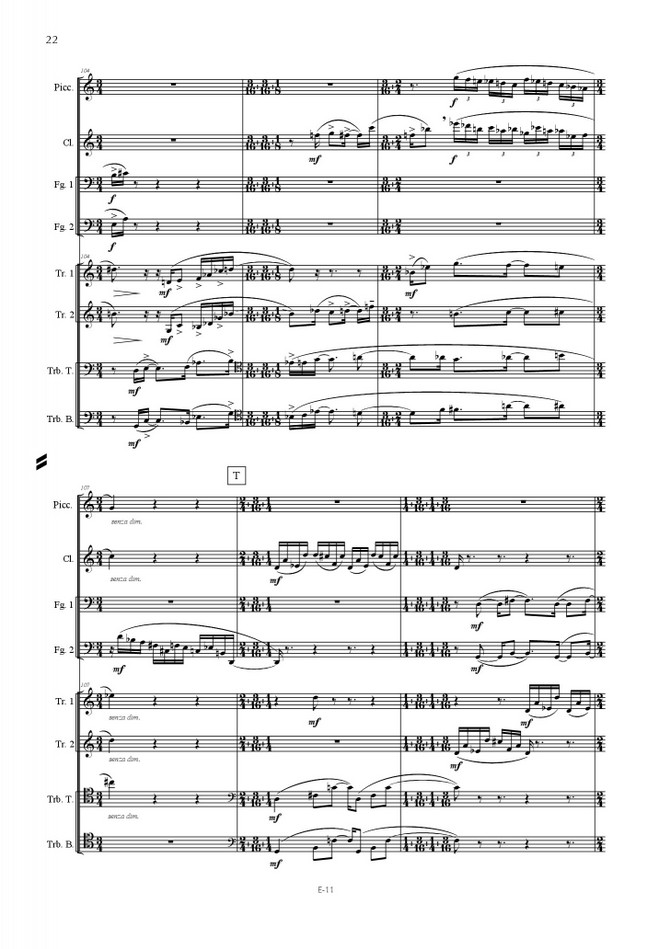 ALESSIO ELIA
OCTET
From the CD booklet:
In the Octet written in 2016 by Alessio Elia, the musical elements, or their strongly contrasted combination, significantly shape the structure of the piece. The utilization of different temperaments – a technique defined by the composer as “polysystemism” – further emphasizes his concept of sound as a phenomenal entity. The first part recalls the characteristic of a toccata, punctuated with the violent, sometimes bitter, intrusions of the trumpets, trombones and flute, which is mostly scored in the highest register. In the second movement – clearly distinguished from the previous one – woodwinds and brass are reunited in a slow and solemn chorale, coloured in dark and blurry tones. In the “prologue”, the imaginary voices emerge from the overlap of the ever-changing metrics in the “chorale” (crossed however, especially in the final part, by deep “concertante” ribs) highlighted by the dynamic contrasts, the mutual resonance of the timbres, and the use of natural harmonics. (Guido Barbieri)
Composer's description
Commissioned by I Solisti della Scala, for the Cd project "Octets", based on a concept of the conductor Andrea Vitello and released by Warner Classics, my Octet (2016) is divided into two movements. The first one shows a very dense contrapuntal writing aimed at  creating a multi-trajectory listening, in which the listener is allowed  to identify the melodic lines that are closest to his listening intentions. In this way a constant interaction between music and listening is outlined and the act of listening involves a listener's active function. The other feature of such a thick counterpoint is to change the timbre of the instruments. The counterpoint, and together with it the orchestration, becomes a timbre generator. In this direction, especially in the second movement, the simultaneous use of different tuning systems, a process I have called polysystemism, highlights the physical characteristics of sound, the acoustic phenomena and how they are perceived. My music focuses on the physical dimension of sound, tracing the inner forces which rule the music material and trasform it through time.
Score at Universal Music Publishing - Editio Musica Budapest
ALBERTAS NAVICKAS
BY HEARTH

From the CD booklet:
In by heart (2017) the 31-year-old Lithuanian (but adopted Parisian) composer Albertas Navickas breaks down the instrumental filigree in subtle whispers: the brass and woodwinds are often scored in unpitched “blow” effects and often combined with the pronunciation – in the mouthpiece of the flute – of some verses from the Sonnet no. 30 by William Shakespeare. The sounds progress into an abstract and disconnected galaxy in which the relationships and similarities between each part are torn apart, deconstructing the foundation of polyphonic writing.
(Guido Barbieri) 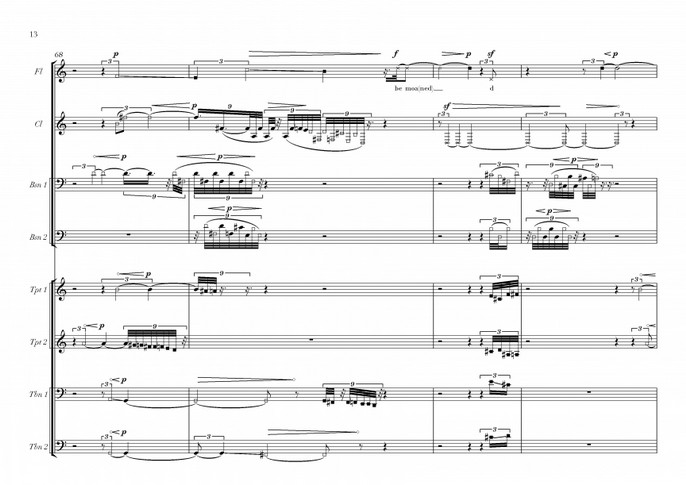 RITA UEDA
GARGOYLES IN LOVE
From the CD booklet:
Gargoyles in Love (2017) by Rita Ueda (born in Japan but educated in Canada) presents an architecturally Copernican concept. As the title suggests, the piece has a clear narrative connotation: the Gargoyles are monstrous creatures (dragons, demons, winged lizards) that on medieval edifices adorn the end part of the gutter, and were meant not only as architectural elements but also as deterrent against evil spirits. The score depicts the grotesque and beastly canoodling of the winged creatures: their awakening, their awkward flight, the sky filled with their repulsive bodies, their kisses, and their romantic weeps… But Ueda’s writing, which condenses the sound in thick, sometimes screaming, conglomerates of matter, an unexpected texture of colours and tones shines through. (Guido Barbieri)